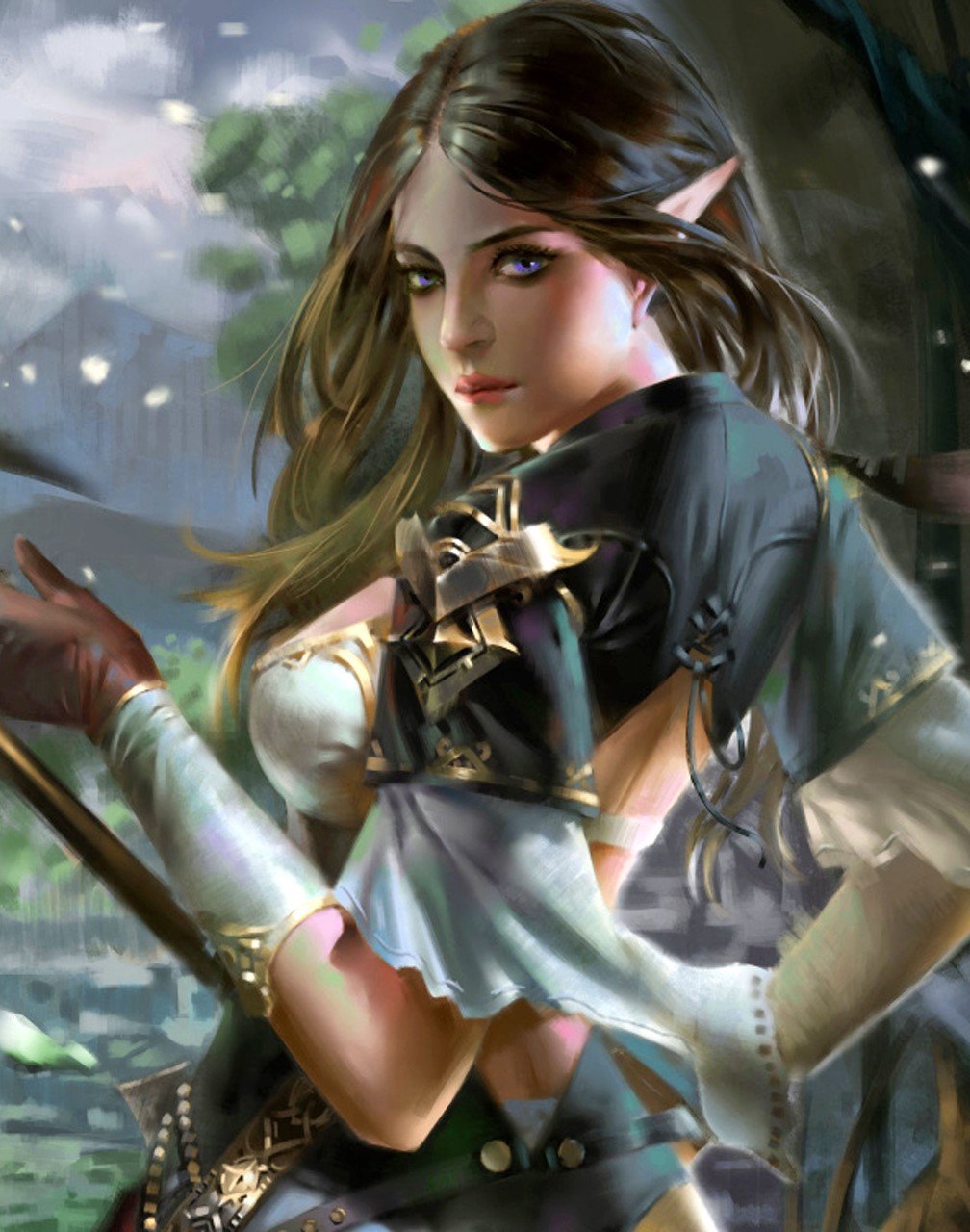 Zyria is a young, beautiful elvish woman with long, dark golden brown hair and deep violet eyes. She is tall and slender, though perhaps a little short by elvish standards, and has fair skin that burns easily after a life under the tree canopy. Her time as a member of the Inyrengroth hunting party kept her fit and healthy, though her toned muscles only show when she uses them. She steps lightly, learning at a very young age how to stealthfully approach potential prey.

At first meeting she is quiet, shy, and mysterious, but as she grows to trust she opens up more. She has a pretty smile, though few have seen a true wide grin on her face. She prefers the company of females, she just never had much in common with males other than the use of hunting weapons. Although she excels at hunting with her bow and daggers, she doesn’t take the lives of innocent creatures lightly. Her other hobbies include performing small magic, such as healing wounds, and mixing potions. 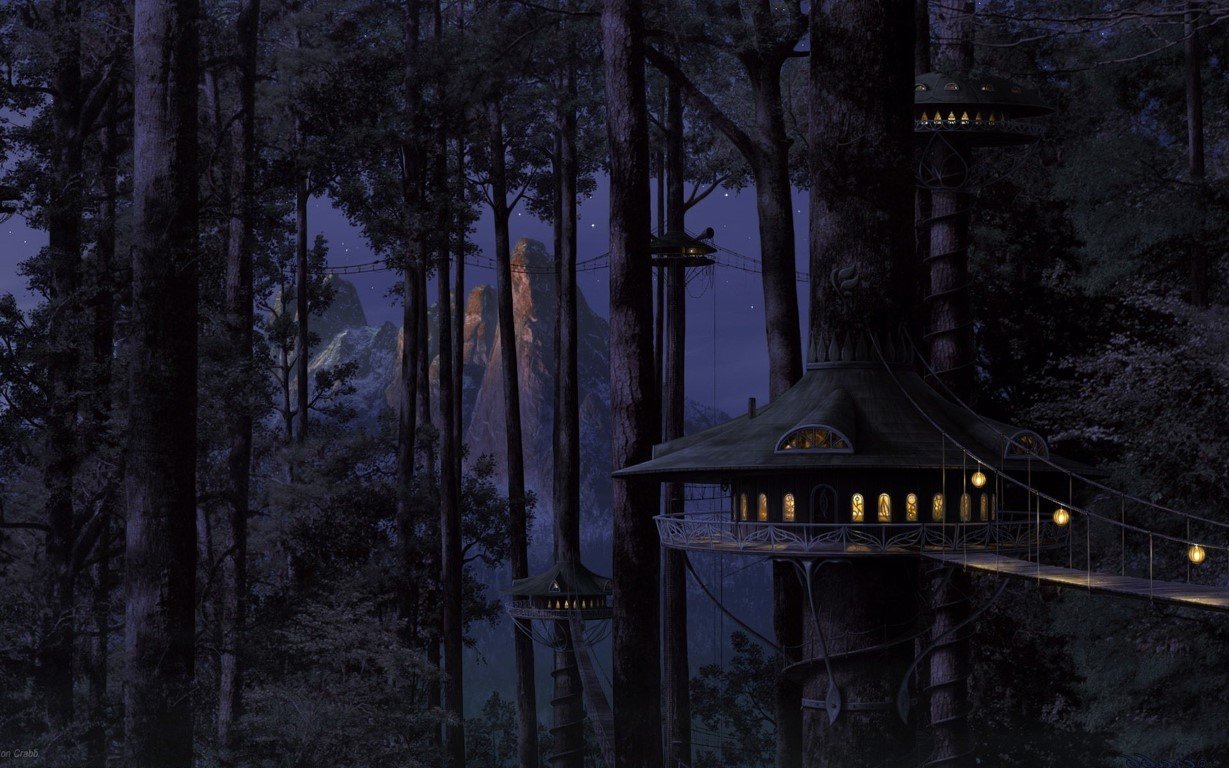 Born and raised in the Eldan royal family of Inyrengroth, Zyria grew up as the nearly non-existent middle child of King Allaris and Queen Raelianna. With 2 older brothers and 2 younger sisters, she was exactly the middle child and as far as her parents were concerned, exactly the least important. Their primary focus was raising their boys to be respectable princes, and when they weren’t preoccupied there they were raising their two youngest girls who were still in need of schooling. As Zyria had already completed her required schooling, she often found herself left alone to do as she pleased.

It didn’t take long for her to get bored of wandering the city and ground floor. You see, Inyrengroth isn’t very big. It is nestled deep within the Aldermoss Forest, and provides shelter to over 40 elven families. It’s architecture consists of treehouse-like homes connected by long rope bridges and ladders. Highest in elevation are the royal homes which belong to the 5 royal families who act as the leaders and decision makers of the commune. At most, Zyria was able to run along the bridges, play with the other royal children, and visit the shops at ground level.

When she became of age, her parents chose what they felt was a compatible mate for her. His name was Rathal, 32 years old and another member of the hunting party. Sure, he was handsome, talented with a bow, and his parents were of high stature. These were precisely the reasons Zyria wanted nothing to do with him.

Unfortunately, or fortunately depending on how you look at it, her days of sneaking out of the city came to an abrupt end. The night before her prearranged wedding was to occur, she snuck out for one last adventure. When she returned, one of the guards nearly shot an arrow through her skull thinking she was an intruder sneaking into the city. Although her parents had caught her sneaking back in several times, this time the rest of the council witnessed her disobedience. Leaving city limits was considered desertion, and the penalty was exile. Her parents had no choice but to follow the law.

As she set out through the front gates, a bag of clothes and supplies strung over her shoulder, her heart felt heavy. She knew she would miss her parents, her siblings, and her friends. She also was not ignorant to the shame she brought her family for deserting them and the city. However, she felt no fear as the gates clanked shut behind her. Instead, she felt a weight lifted that she hadn’t realized was there. Her heart raced in excitment as she realized what she was feeling was freedom. A second wind shoved her forward and she sprinted off into the morning sunlight.

After a few days of traveling, she found herself in the land of Sionayra, where she spent several years living off the land alone in her own neck of the woods. Eventually, she moved on, in search of a place that really felt like home. That was when she came across a place she called the Mystic Vale, a luxurious green meadow that stretched out farther than the eye can see, scattered with tall trees, lush berry bushes, and a rainbow array of flowers. A long, shimmering river meandered down the center, its edges lined with pebbles and stones. Off in the distance, silver mountains stretch up to the sky in jagged peaks. To her, it was beautiful, untouched paradise.

She now spends her time exploring the lands between The Mystic Vale and Sionayra, meeting new friends and species as she goes.